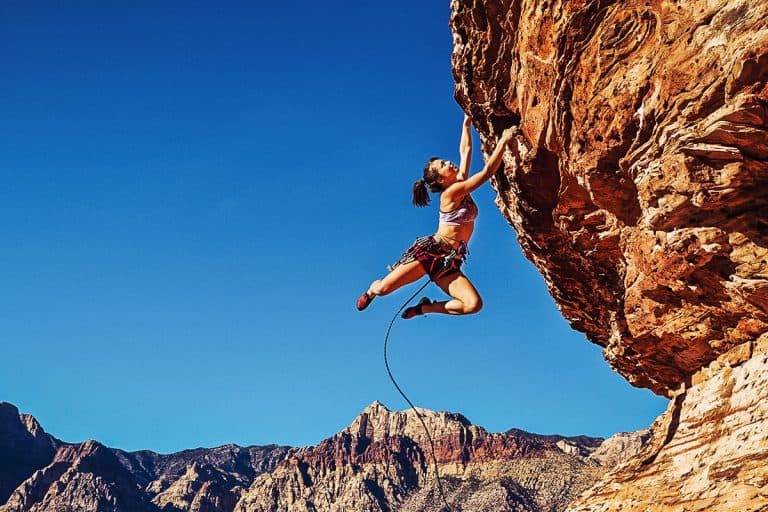 If you’re not out climbing, reading inspiring climbing quotes is the next best alternative. We understand first-hand the value that a quality quote about climbing can have, especially if you find yourself daydreaming about the mountains.

Coming up, we’ve put together a selection of our all-time favorite climbing quotes so you can find your motivation for your next climbing adventure.

If you’re struggling to see the path forward, check out these great keep climbing quotes to help you stay motivated.

“Every mountain top is within reach if you just keep climbing.” - Barry Finlay

“Your circumstances don’t define you, your decisions do. So keep your head up and keep climbing.” - Tavi Castro

“If you’re climbing the ladder of life, you go rung by rung, one step at a time. Don’t look too far up, set your goals high but take one step at a time. Sometimes you don’t think you’re progressing until you step back and see how high you’ve really gone.” - Donny Osmond

Sometimes you just need a bit of inspiration for your day. Here are some climbing-themed inspirational quotes by the best alpinists and climbers in the world.

“The best part of climbing is when it all clicks and gravity ceases to exist.” - Chris Sharma

“Climb if you will, but remember that courage and strength are nought without prudence, and that a momentary negligence may destroy the happiness of a lifetime. Do nothing in haste; look well to each step; and from the beginning think what may be the end.” - Edward Whymper

“There are two kinds of climbers, those who climb because their heart sings when they’re in the mountains, and all the rest.” - Alex Lowe

“There are a dozen reasons for climbing, some bad, and I’ve used most of them myself. The worst are fame and money. Commonly people cite exploration or discovery, but that’s rarely relevant in today’s world. The only good reason to climb is to improve yourself.” - Yvon Chouinard

“The best climber in the world is the one who’s having the most fun.” - Alex Lowe

“I would say that the need to climb comes from that tough, lonely place of searching for your dignity. You know, that place – where we actually choose to confront our own weaknesses and fears, where we rebel against the terror of death – is really about dignity. That’s why alpinism is not just the act of ascending a mountain, but also inwardly of ascending above your self.” - Voytek Kurtyka

“The rope connecting two men on a mountain is more than nylon protection; it is an organic thing that transmits subtle messages of intent and disposition from man to man; it is an extension of the tactile senses, a psychological bond, a wire along which currents of communication flow.” - Trevanian

“Identifying and overcoming natural fear is one of the pleasing struggles intrinsic to climbing.” - Alex Lowe

Quotes About Climbing To The Top

Climbing is inherently about getting to the top of something, whether that’s a cliff, mountain, tree, or frozen waterfall. Here are some of our favorite sayings about climbing to the top.

“Over every mountain there is a path, although it may not be seen from the valley.” - Theodore Rothke

“How you climb a mountain is more important than reaching the top.” - Yvon Chouinard

“I look at climbing not so much as standing on the top as seeing the other side. There are always other horizons in front of you, other horizons to go beyond and that’s what I like about climbing.” - Chris Bonnington

“Getting to the summit is optional, getting down is mandatory.” - Ed Viesturs

“When you reach the top, keep climbing.” - Proverb

“You cannot stay on the summit forever; you have to come down again. So why bother in the first place? Just this: what is above knows what is below, but what is below does not know what is above. One climbs, one sees. One descends, one sees no longer, but one has seen.” - René Daumal

“Highest of heights, I climb this mountain and feel one with the rock and grit and solitude echoing back at me.” - Bradley Chicho

There are few better ways to spend your time in the mountains than scrambling over rocks and to the top of steep cliffs. These quotes embody the joy of rock climbing in the outdoors.

“I find that rock climbing is the finest, most healthiest sport in the whole world. It is much healthier than most; look at baseball, where 10,000 people sit on their ass to attach a handful of players.” - John Salathé

“In this short span between my fingertips and the smooth edge and these tense feet cramped to a crystal ledge, I hold the life of a man.” - Geoffrey Winthrop Young

“Remember that time spent on a rock climb isn't subtracted from your life span.” - Will Niccolls

Many climbers start their career in the vertical world by climbing trees in their backyard. Whether tree climbing was your favorite pastime as a kid or you’re a passionate arborist to this day, here are some climbing trees quotes to enjoy.

“To climb a tree is for a child to discover a new world.” - Friedrich Fröbel

“If you need a bit of perspective, climb a tree.” - Winnie the Pooh

Climbing as we know it today got its start on lofty slopes high up in the mountains. This selection of quotes brings us back to the origins of climbing and encourages you to summit your next peak.

“You keep putting one foot in front of the other, and then one day you look back and you’ve climbed a mountain.” - Tom Hiddleston

“It’s not the mountain we conquer, but ourselves.” - Sir Edmund Hillary

“Climb the mountain not to plant your flag, but to embrace the challenge, enjoy the air, and behold the view. Climb it so you can see the world, not so the world can see you.” - David McCullough, Jr.

“After climbing a great hill, one only finds that there are many more hills to climb.” - Nelson Mandela

“Stop staring at mountains, climb them instead.Yes, it’s a harder process, but it will lead you to a better view.” - Anonymous

“The mountain decides whether you climb or not. The art of mountaineering is knowing when to go, when to stay, and when to retreat.” - Ed Viesturs

“Alpinism is the art of going through the mountains confronting the greatest dangers with the biggest of cares. What we call art here, is the application of a knowledge to an action.” - René Daumal

Climbing is all about getting to the top of something grand, such as a sheer wall of granite, that seems otherwise insurmountable. These quotes reminisce about the challenges and excitement that come with climbing over walls.

“Stand at the base and look up at 3,000 feet of blankness. It just looks like there’s no way you can climb it. That’s what you seek as a climber. You want to find something that looks absurd and figure out how to do it.” - Tommy Caldwell

“Life is brought down to the basics: if you are warm, regular, healthy, not thirsty or hungry, then you are not on a mountain. Climbing at altitude is like hitting your head against a brick wall - it’s great when you stop.” - Chris Darwin

“It’s a wonderful feeling to push even a tiny piece of the planet down beneath one’s feet. If it’s overhanging plastic, it’s going to pump your arms like bloated sausages; if it’s a steep snow-slope at 27000 feet it’s going to deaden the legs and make the lungs like overworked bellows. Either way, the challenges are obvious.” - Adrian Burgess

Ice climbing is a challenging but immensely rewarding pursuit. These quotes remind us of the beauty and extremes of ice climbing

“While ice is not really alive, it is certainly animate. It exists in a dynamic state of perpetual vibration, flux, and movement. Enjoy its existence, and its safe passage in the mountains.” - Will McCarthy

“Early season or new ice is often little more than unconsolidated icicles stuck together with the climber’s optimism.” - Will Gadd

“If the ice is good, you don’t need pro. If the ice is poor and you need pro, you can’t get it in anyway.” - Jay Smith

Except for certain rare days of triple-high biorhythms and favorable planetary alignments, grade 6 is beyond reach.” – Dougal McDonald

“The architecture or look of a line is really important to me, and often ice can add something to the look of the wall. A dry rock wall is often not very dramatic. You add ice and snow and the features stand out in greater relief and it looks much wilder.” - Jeff Lowe

We all need a bit of humor in our lives. Here are some funny climbing-related quotes to make you chuckle.

“Nobody climbs mountains for scientific reasons. Science is used to raise money for the expeditions, but you really climb for the hell of it.” - Sir Edmund Hillary

“What an odd sport we inhabit, where bits of obscure rock in remote locations are recognizable.” - Richard Pawlowicz

“To be a climber one has to accept that gratification is rarely immediate.” - Bernadette McDonald

“Turn your brain off and send.” - Chris Sharma

“In the mountains there are only two grades: You can either do it, or you can’t.” - Rusty Baille

“I remember all the moves of every problem I've ever done. This is what keeps me up at night.” - Dave Graham

“The difference between climbers and normal workers is that climbers are glad of the Mondays, so they can rest.” - Guillaume Dargaud

“Better we raise our skill than lower the climb.” - Royal Robbins

Whether you’re new to climbing or you’re a seasoned mountaineer, we hope you enjoyed our list of the best climbing quotes around.

If you particularly liked any of our quotes or found that any of them motivated you, please let us know in the comments below! Also, don’t forget to share this article with your friends and family so everyone can find their next inspirational saying.

About
Gaby Pilson
Gaby Pilson is a professional outdoor educator and climbing instructor with over ten years of experience delivering outdoor experiences. She holds multiple outdoor safety and education certifications and specializes in guiding expeditions to the polar regions. Gaby also works as a Wilderness Medicine Instructor and Climbing Wall Instructor Course Provider.
About Outdoors Generations
We are a family-run site with a team of outdoor experts who strives to inspire and motivate people of all ages to venture outside with confidence.
A little more about us.
Most Popular Posts
All the Different Types of Rock Climbing
How to Break In Climbing Shoes | 7 Easy Ways
Free Climbing Guide: Everything You Need to Know

We want to make Hiking, Camping, and Backpacking more enjoyable for people of all ages, inspiring and motivating others to venture outside with confidence.
Explore
HIKE & CAMP
AMAZON ASSOCIATES PROGRAM
As an Amazon Associate, we earn from qualifying purchases.
© 2022 Outdoors Generations
|
Disclaimer
|
Privacy Policy