Free Climbing Guide: Everything You Need to Know 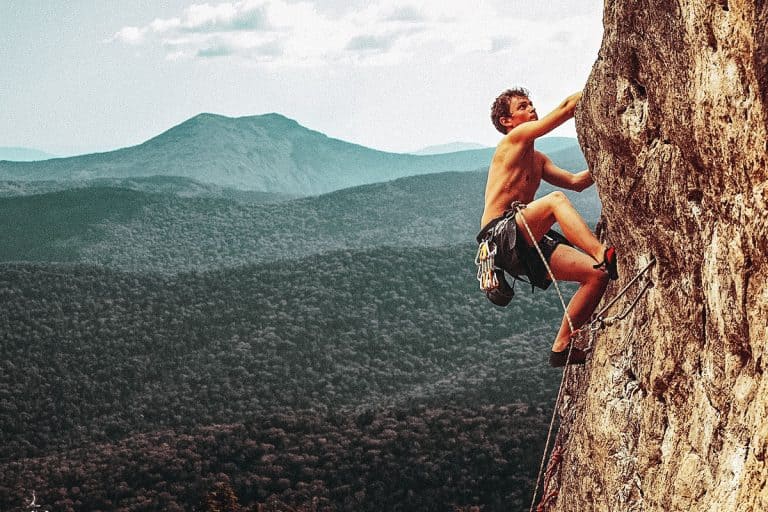 Whether you're a first-time climber or a seasoned mountaineer, at some point, you've probably heard the term "free climbing." Now that movies like Free Solo and Dawn Wall have brought climbing into the mainstream, however, it can be hard to know the difference between free climbing and other forms of the sport.

In the climbing world, there are two broad disciplines: aid climbing and free climbing.

A free climb is any route that's ascended without the use of extra gear to aid in upward motion. Aid climbing is when one uses additional equipment to complete the climb.

On an aid route, an aid climber places pieces of equipment to the rock then they pull on the gear to move past a blank section on the cliff. A free climber would simply make their way up a route without this kind of assistance.

However, just because something is "free climbed" doesn't mean that the rock climber is climbing without a rope. In fact, most climbers use a rope for protection.

Although it's often confused with free climbing by non-climbers, free solo climbing is a discipline where climbers climb without any protective gear, like a rope.

Whenever someone goes free solo climbing, they recognize that any fall will be a ground fall. Ground falls are often fatal, so this discipline is only suitable for experienced climbers, like Alex Honnold, that are okay with this level of risk.

Now that you understand the difference between aid climbing vs free climbing, lets talk about the various types of free climbing. These include:

Bouldering involves ascending small routes (called "problems") on a boulder or short cliff. When bouldering, people don't use a rope because they will only fall a few feet to the ground. Rather, boulderers use crash pads (large mattress-type pieces of padding) to soften their fall.

Bouldering is popular both in gyms and outside. Many top climbers began their careers as boulders because it's a fun discipline that requires strength and technique but little gear.

Traditional, or trad climbing, is a discipline that involves starting at the bottom of a cliff and moving upward, all while placing gear in the rock for protection.

Sport climbing is very similar to traditional climbing because it involves starting at the bottom of a route and moving upward. However, sport climbing routes have bolts in the rock for protection, so there is no need to place your own gear in the rock.

This discipline is very popular because it requires relatively minimal gear, though sport climbers need to be strong and acrobatic to succeed.

We climbers love nothing more than to use techy jargon to describe different kinds of ascents. With that in mind, there are a few different types of ascents that any lifelong climber ought to know:

An onsight is any ascent where a climber makes it from the bottom to the top of a route on their very first try without falling. Some people also say that an onsight is only an onsight if they have no prior firsthand knowledge of the route.

A redpoint is effectively the same thing as an onsight, but the ascent doesn't have to be the climber's first time on the route. So long as a climber gets from the bottom to the top of a route without hanging on the rope or falling, it's a redpoint.

Pinkpoint ascents are similar to redpoints, but they require that the climber pre-place gear on the route before making the ascent. Pre-placing gear reduces the difficulty of a climb, so a redpoint requires more effort than a pinkpoint.

A headpoint ascent is when a climber first practices a route on toprope before making a redpoint ascent on lead. Doing so gives the climber a chance to practice the tricky sections of a route with minimal risk.

All types of climbing involve inherent risk and free climbing is no exception. However, it's worth noting that for everything except free soloing, there are a number of safety precautions that a climber can take to lower their risk of a major fall.

For example, when free climbing, a climber may place protective equipment into the rock or clip into a blot on a route. When used properly, this gear can limit a climber's fall to just a few feet, rather than to the ground. At the same time, boulderers use crash pads to soften their short falls to the ground.

Nevertheless, free soloing is one discipline that has serious consequences should something go wrong. Free solo climbing should not be done by anyone but an experienced climber that's okay with taking on a sizable amount of risk.

As most climbers know all too well, free climbing is a gear-intensive sport. Here's a quick look at the different kinds of gear you'll need for various types of free climbing routes:

Of all the climbing disciplines, bouldering is one of the easiest to get into because it requires relatively little gear. To get started, you'll need:

That being said, if you looking to go bouldering at a gym, you probably won't even need a crash pad. Just get chalk and some shoes and you can get your climb on.

Additionally, trad climbers need everything that a sport climber has, plus protection to place in the rock . This includes gear like cams, and nuts, as well as carabiners and slings.

As you can imagine, free solo climbing doesn't require too much equipment. You simply need your shoes, chalk, and a strong head for heights!

Again, note that free soloing is only appropriate for very experienced climbers that are comfortable with the risks involved.

The History of Free Climbing

Humans have been scampering up rocks since time immemorial. Researchers have found evidence of human activity in places that could only have been reached by ascending a steep, rocky cliff.

However, the history of contemporary recreational climbing dates to a handful of places in the United Kingdom and in the European Alps.

One of the first modern rock climbs was completed in 1492 by Antoine de Ville when he was the first person to reach the summit of Mount Inaccessible on France's Mont Aiguille on the orders of King Charles VII.

Some 350 years later, we had the Golden Age of Alpinism in the European Alps. Starting with Alfred Wills' 1854 ascent of the Wetterhorn and culminating with Edward Whymper's infamous ascent of the Matterhorn in 1865, this period saw the first ascent of most major peaks in the Alps.

In the years that followed, aristocratic Europeans became increasingly infatuated with high-alpine locales, particularly in the Himalaya. In order to train for these difficult ascents, many mountaineers started ascending smaller cliffs crags in their home countries.

The Rise of Rock Climbing

Early proponents of the rock climbing that we might think of as free climbing today included George Mallory, who famously disappeared on Mount Everest in 1924. Mallory and many of his other contemporaries climbed in the Peak and Lake Districts of England to train for their coming adventures.

The 1950s through 1980s also saw a rapid development in rock climbing techniques, particularly around Yosemite Valley. However, many of these first ascents of peaks like El Capitan and Half Dome were done using artificial aid (called modern aid climbing). Climbers would create ladders and pull themselves up a route as needed.

During the 1970s, climbers pioneered a new type of climbing called free climbing, where they used nothing besides their hands and feet to make upward progress, though they still used a rope for safety. The 1993 free ascent of The Nose on El Capitan by Lynn Hill was a groundbreaking achievement that heralded in a new age of free climbing.

Since then, climbers, like Tommy Caldwell, have pushed the limits of what's possible in the sport. Others, such as Alex Honnold, have also pioneered free soloing, which is climbing without protective gear or a rope. Famous climbers like Chris Sharma have also made bouldering a popular pursuit.

Even still, a new generation of young crushers, like Ashima Shiraishi, Kai Lightner, Adam Ondra have brought climbing into the mainstream. The inclusion of free climbing in the 2020 Tokyo Olympics also made ventures into the climbing gym and outdoors more accessible than ever to a wider audience.

Here are our answers to some of your most commonly asked questions about free climbing:

How do Free Climbers Get Down?

Free climbers get down by either hiking off the backside of a cliff or by rappelling down a rock climb. Rappelling is the act of descending using ropes and it is a popular option when no good trail exists off of the top of a cliff.

What is Considered Free Climbing?

When free climbing, a climber uses nothing but their physical ability to assist progress up a route. This includes everything from top roping, bouldering, traditional climbing, and multi-pitch climbing, where ropes are used for protection, to free soloing where no protective gear is used.

Free climbing, like any other form of climbing, is inherently dangerous. However, most people who free climb use ropes, helmets, and other pieces of equipment to protect them should they fall.

Is Free Climbing the Same as Lead Climbing?

Lead climbing is a type of free climbing that involves climbing from the ground up without a rope already overhead. Doing so requires special gear that is placed into the rock face to protect the climber from serious injury if they should fall.

About
Gaby Pilson
I am a mountaineering and climbing guide, as well as a professional outdoor educator. I split my time between working in the polar regions as an expedition guide, working as a climbing instructor, and pursuing my other passions of traveling, writing, and drinking copious amounts of coffee.
About Outdoors Generations
We are a family-run site with a team of outdoor experts who strives to inspire and motivate people of all ages to venture outside with confidence.
A little more about us. 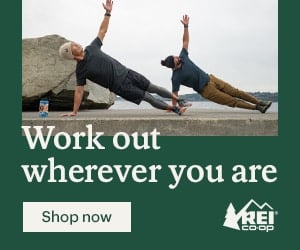 We want to make Hiking, Camping, and Backpacking more enjoyable for people of all ages, inspiring and motivating others to venture outside with confidence.
Explore
HIKE & CAMP
AMAZON ASSOCIATES PROGRAM
As an Amazon Associate, we earn from qualifying purchases.
© 2022 Outdoors Generations  |
Privacy Policy