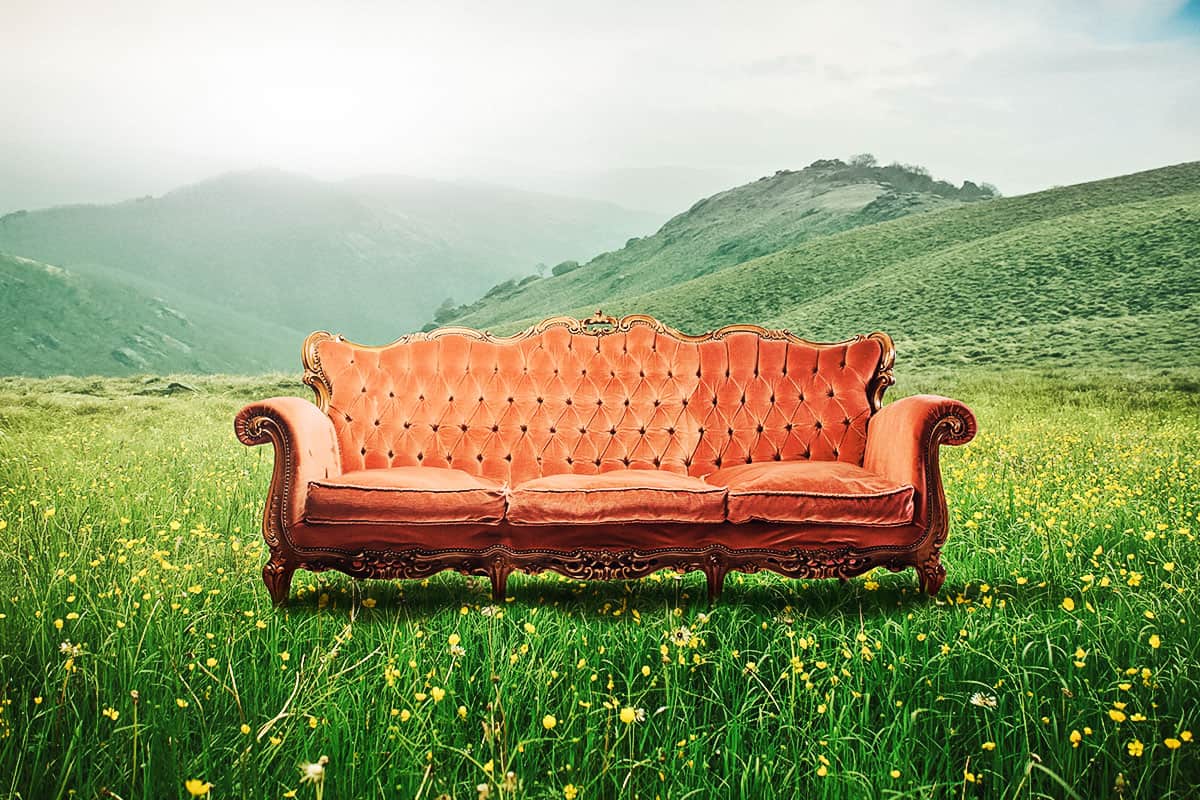 The Best Hiking Movies to Get Inspired by the Outdoors

There’s no better way to get inspired by the outdoors than to curl up on the couch and tune into a quality hiking movie. But, with the seemingly endless collections of content available on different streaming platforms, it can be hard to choose just one for your next film night.

So, here’s a list of my top 8 favorite hiking movies that’ll make you want to hop out of bed, strap on your boots, and hit the trail: 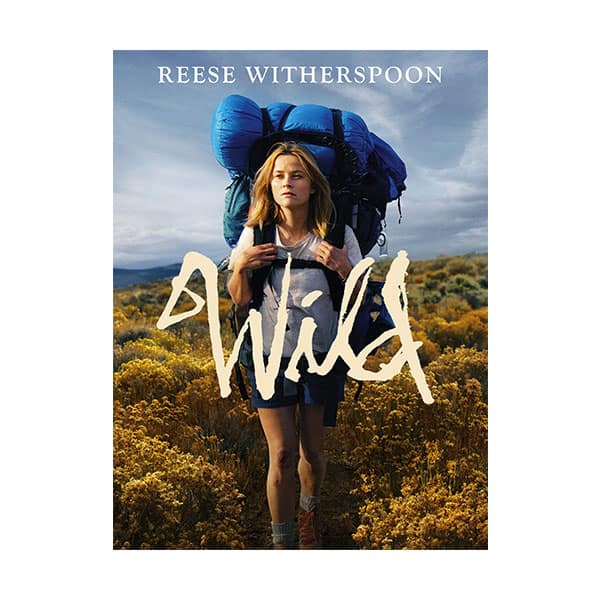 One woman’s journey on the Pacific Crest Trail

An adventure-filled and emotional drama about finding oneself while thru-hiking from Mexico to Canada on the PCT.

Wild is an adventure drama that’s based on the real-life story of Cheryl Strayed, who famously chronicled her journey along the Pacific Crest Trail in her 2012 memoir of the same name. The film follows Strayed as she leaves her troubled life behind to hike from Mexico to Canada in an attempt to heal and rediscover herself in the wake of her mother’s death and a difficult divorce.

Along the way, she meets an interesting group of fellow hikers and struggles with dehydration, exhaustion, and foul weather as the film alternates between stunning alpine scenery and flashbacks to Strayed’s life before the PCT. The critically-acclaimed film depicts the delicate balance between the healing power of the outdoors and the difficulties of life on a long-distance trail.

Wild is a fan favorite of aspiring PCT thru-hikers and outdoor enthusiasts, alike. It’s a fantastic choice for anyone looking for a moving story of how one woman found herself in the mountains that keeps you captivated from start to finish.
Watch It On Amazon 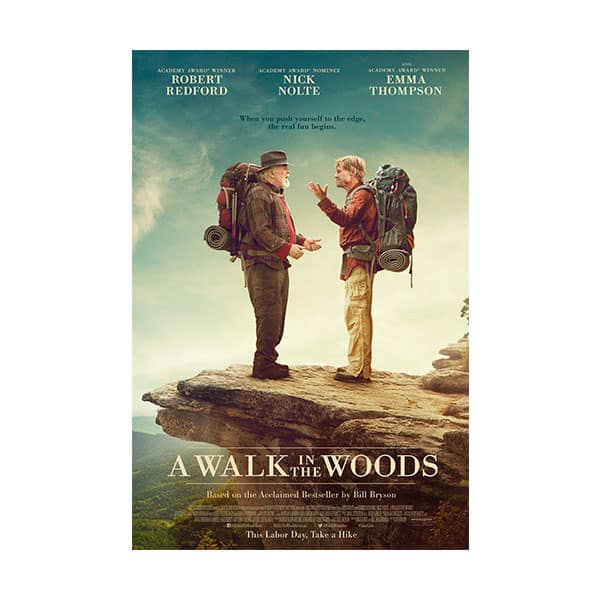 A Walk In The Woods

A laugh-out-loud comedy about life on the Appalachian Trail.

Based on the best-seller of the same name, this biographical dramedy offers a comedic take on what it’s like to thru-hike a long distance trail.

A Walk In The Woods is based on the best-selling book of the same name by award-winning author, Bill Bryson. The movie is a biographical comedy-drama that tells the story of Bryson’s attempt to rediscover his home country after living abroad for over a decade by hiking the Appalachian Trail.

Much like its paperback counterpart, A Walk In The Woods weaves together a wonderfully engaging storyline with laugh-out-loud comedy, which provides a light-hearted look at life on one of the United States’ oldest long-distance trails. Although Bryson sets out on the trail to reacquaint himself with the landscape of his homeland, he – and his hiking partner Stephen Katz – realize that they may have bitten off a bit more than they can chew.

Throughout the movie, Bill and Stephen meet a truly hysterical cast of characters and get themselves into a wide range of situations for which they are woefully unprepared. A Walk In The Woods is a go-to fan-favorite for a bit of lighthearted adventure during your next movie night.
Watch It On Amazon 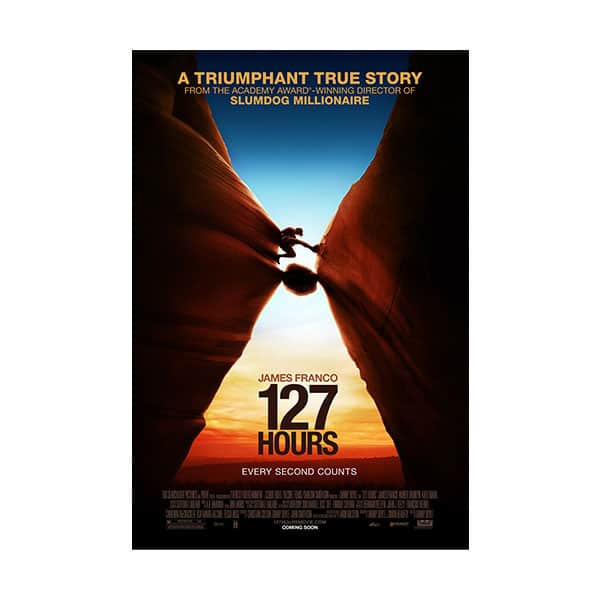 The true story of survival and perseverance in the outdoors

Aaron Ralston’s day of canyoneering quickly took a turn for the worse when he got trapped under a boulder in a deep slot canyon.

When we head into the mountains, we all expect to eventually make it home. But, for Aaron Ralston, a fun, carefree day of canyoneering nearly ended in disaster when a stumble turned into a fight for his life.

127 Hours recounts the gripping tale of Ralston’s nearly ill-fated adventures in the canyons of southeastern Utah in the spring of 2003. The film starts out when Ralston heads out on a day of solo hiking in Canyonlands National Park and quickly befriends two other hikers.

After nearly a whole day of swimming and exploration in the park’s many slot canyons, Ralston’s new friends head home and his epic begins. A simple slip and fall later, he finds himself trapped deep in a canyon, pinned down under the weight of a large boulder. 127 Hours vividly depicts every moment of Ralston’s attempt to get home and the drastic measures he has to take to free himself from the mountains in a thrilling movie that’s sure to keep you on the edge of your seat.
Watch It On Amazon

Follow along as the first-ever African-American expedition heads off to summit Denali, while highlighting racial disparity in the outdoors.

An American Ascent tells the story of the first-ever African-American expedition to Denali, the highest peak in North America. This action-packed documentary film follows a team of nine individuals who joined the National Outdoor Leadership School’s “Expedition Denali,” which aimed to highlight the racial disparities of who has access to outdoor recreation opportunities.

Throughout its hour of runtime, An American Ascent showcases nine exceptional climbers and the challenges they faced on their historic multi-week expedition. The film combines stunning mountain photography with moving narration that encourages us to consider the ever-changing landscape of access and responsible recreation in the outdoors.
Watch It On Amazon 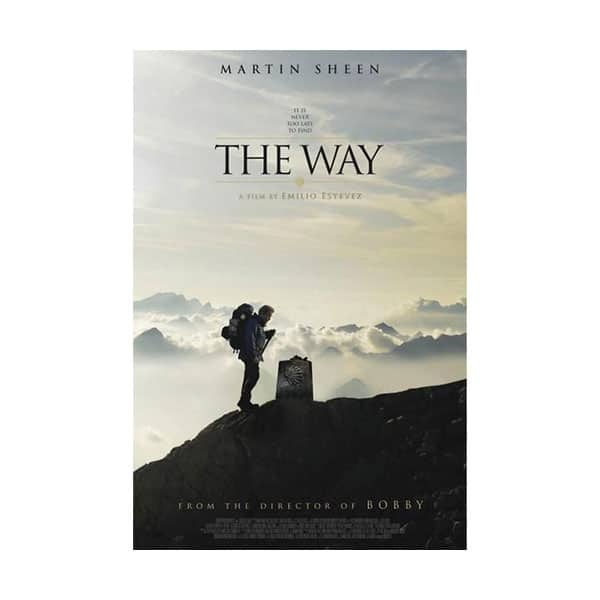 After his son dies on the Camino de Santiago, a grieving father heads off to hike the route and find himself along the way.

When Dr. Thomas Avery’s son dies during a storm while trekking along the Camino de Santiago in the Pyrenees, his life is a mess. Immediately, he set off for Spain, hoping to bring his son’s body home; however, he realizes that the best way to deal with his grief and honor his son is to walk the Camino in his stead.

While trekking along this ancient pilgrimage route, Avery meets four other fellow hikers, with whom he forms a tight-knit group. Throughout the film, viewers get a heartfelt look at Avery’s attempt to grapple with his difficult loss while balancing the challenges of life on the famed Camino de Santiago.

Unique among outdoor adventure films, The Way manages to find a great middle-ground between beautiful alpine landscapes and a heartwrenching tale of grieving, discovery, and friendship in the mountains.
Watch It On Amazon

Once he graduates university, Chris McCandless decides to head north and live independently in the Alaskan wilderness. This is his story.

After graduating from university, Chris McCandless does anything but the ordinary. In a flat-out rejection of convention, he donates nearly all of his savings and personal belongings, destroys any remnants of his identity, and sets off on a cross-country road trip in his Datsun 210.

After a few months out west and countless misadventures in the American Southwest, though, McCandless, is already itching for a new destination. Hoping to live out his best life in the wilderness, he eventually makes it up to Alaska, where his true adventures of off-grid living and survival begin.

Into The Wild is the film adaptation of Jon Krakauer’s international-bestseller book of the same name. This based-on-a-real-story film is a moving and poignant look at the life and struggles of Chris McCandless and his attempt to live out a life that brought him deep into the wilderness of the Alaskan backcountry.
Watch It On Amazon 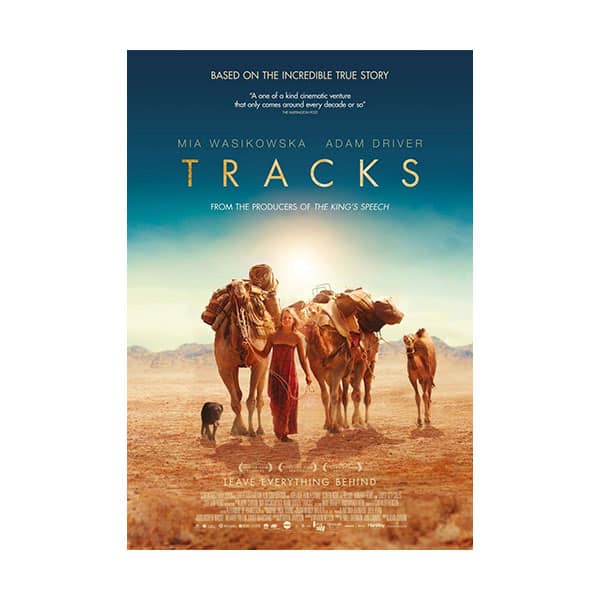 Across the Australian Outback on foot

A search for a life well-lived leads one woman to walk across the vast desert of the Australian Outback.

Relatively few people ever venture into the Australian Outback, and even fewer attempt to cross it on foot. Tracks is the captivating story of Robyn Davidson’s 1977 trek from Alice Springs across the vast desert landscape of Western Australia’s Outback to the Indian Ocean.

This lesser-known drama documents every moment of Davidson’s grueling hike, which she completed with just her dog and four camels for company. Indeed, Tracks is the tale of one woman’s desire to find more in life than what society has to offer by eschewing social norms and opting for a truly solitary trek through one of the most inhospitable environments on Earth.

But, instead of focusing on what people leave behind when they journey into the wilderness, Tracks shows us how much we can gain from embracing solitude and the existential freedom that can be found in the pursuit of the unknown.
Watch It On Amazon 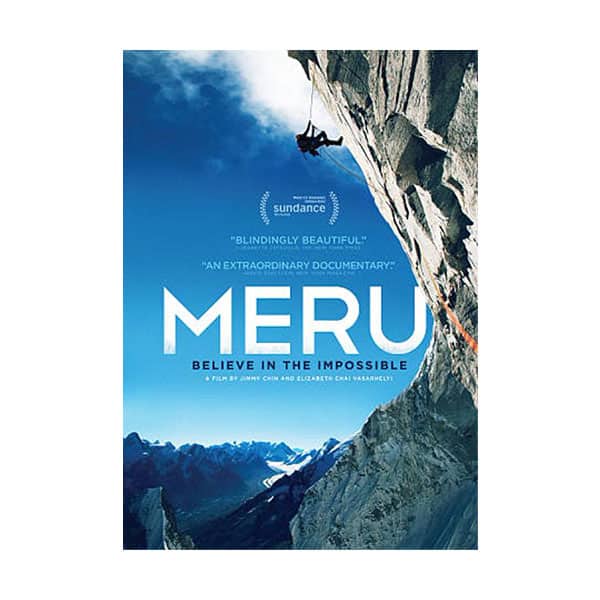 Pure alpine adventure, struggle, and friendship in the Himalaya

An award-winning documentary featuring exceptional cinematography and mountain scenery that keeps viewers on the edge of their seats.

When some people set out for an adventure, they really go big. In Meru, world-reknowned photographer Jimmy Chin sets off for the Indian Himalaya alongside his partners, Conrad Anker and Renan Ozturk.

Their objective? Meru Peak, a jagged, rock summit nestled deep in the Garhwal Himal that rises some 6,660m (21,850ft) high above the valley below.

After trying and failing to summit the peak in 2008, the trio head back to make a second attempt on the 1,200m (4,000ft) face known to climbers only as the ‘Sharks Fin.” But, their difficulties of the expedition begin before the trio ever leaves home when both Ozturk and Chin get caught in two separate and near-fatal accidents in the months leading up to their repeat attempt on the mountain.

Meru is an award-winning documentary film that blends absolutely spectacular cinematography with a true story of grit, resilience, and friendship in the mountains. This high-alpine movie is a must for anyone that appreciates masterfully crafted storylines and a hint of adrenaline all at the same time.
Watch It On Amazon

Binge-Worth Hiking Films For Your Next Movie Night

Now that you have eight great hiking films to choose from, what are you waiting for? Grab a big bowl of popcorn and get ready to go on a world-class adventure with these fantastic outdoor movies.

If you enjoyed any of the movies on my list, feel free to let me know what you thought of it in the comments below. Oh, and don’t forget to share this article with your friends so they can find their next trail inspiration, too!

I am a mountaineering and climbing guide, as well as a professional outdoor educator. I split my time between working in the polar regions as an expedition guide, working as a climbing instructor, and pursuing my other passions of traveling, writing, and drinking copious amounts of coffee.

The Most Inspiring John Muir Quotes for Avid Hiker and Backpacker 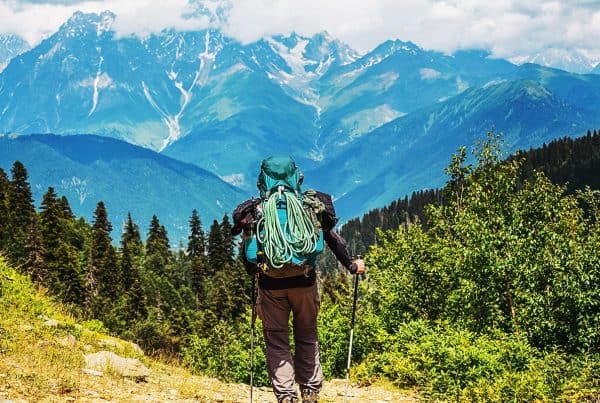 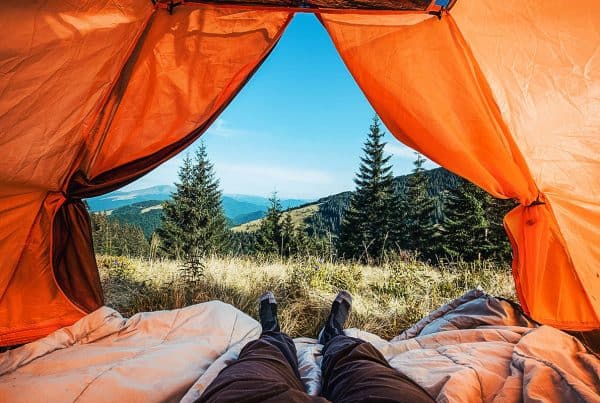 The Best Adventure Quotes to Get Excited About the Great Outdoors

This site uses Akismet to reduce spam. Learn how your comment data is processed.

We want to make Hiking, Camping, and Backpacking more enjoyable for people of all ages, inspiring and motivating others to venture outside with confidence.

As an Amazon Associate, we earn from qualifying purchases.