How to Keep Food Cold While Camping (12 Best Tips) 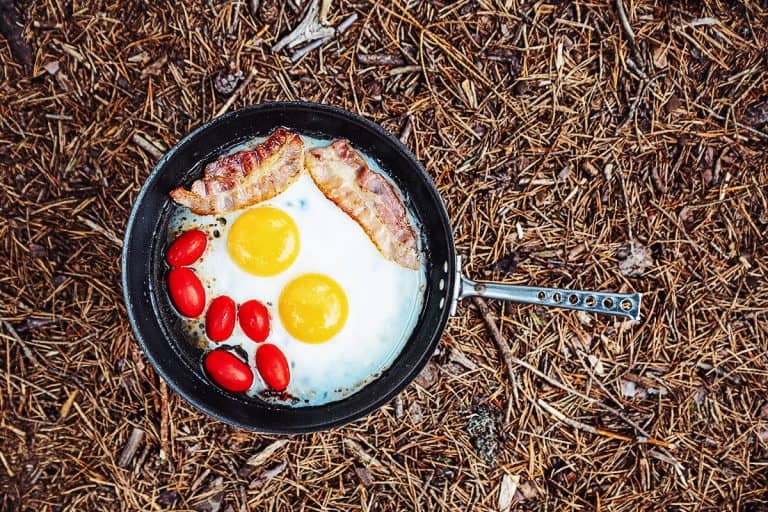 Keeping food cold is one of the challenges of camping. Even with a cooler and ice, your food may not stay fresh during a long trip. After the ice melts and the temperature inside rises, food stays edible for two hours. The inside of the cooler needs to remain below 40 degrees Fahrenheit to properly store food for more than a few hours.

How to keep food cold while camping? Chilling the cooler, freezing meals, and using dry ice or ice packs are just a few ways to preserve perishable foods longer. In the following article, I’ll cover the 12 best tips for keeping food cold while camping, along with food safety guidelines and alternatives to using a cooler.

12 of the Best Ways to Keep Food Cold While Camping

1. Invest in the Right Cooler

A cooler with adequate insulation can retain its internal temperature longer, allowing ice to last longer. After the ice melts, the temperature starts to rise. For the best results, look for hard coolers with at least two inches of polyurethane foam insulation.

Coolers are either soft or hard. The exterior of a soft cooler is typically made with water-resistant plastic, such as nylon. The interior often has reflective material on top of a thin layer of Styrofoam.

Cheap hard coolers are typically made with plastic molded around a thin layer of Styrofoam. Hard and soft coolers with cheap Styrofoam insulation may keep ice from melting for about 12 to 24 hours.

More expensive hard coolers feature polyurethane foam, which is denser compared to Styrofoam. Some of these coolers include two to three inches of insulation and can keep ice for at least five days.

If the cooler itself is warm, the ice that you put inside melts faster. Cool the cooler before filling it to keep the ice longer. Unless you have a large freezer, pouring a bag of ice into the cooler is the easiest way to cool it. Add the ice several hours before you plan on leaving for your trip or the night before.

When you are ready to leave, drain the water and pack the cooler with food and fresh ice. The inner walls of the cooler should now be cold to the touch instead of room temperature or warmer. The ice only needs to maintain the current temperature instead of cooling the interior.

Bags of ice cubes are cheap, but the ice can melt relatively quickly. Using regular ice also increases the risk of your food getting soggy. Ice packs and dry ice last longer and do not soak your food. Ice packs are convenient, as they do not leave the inside of the cooler with a pool of cool water.

Unfortunately, ice packs eventually thaw and need to be refrozen. You are unlikely to find a place to refreeze your ice packs during a camping trip, which may not matter for a short trip. Yet, if you are going to be gone most of the week, you may want to stick with loose ice or dry ice. After the ice packs thaw, you have extra items that you need to store somewhere.

Dry ice is useful for longer trips, as it may keep your cooler cool for days. Unlike loose ice, dry ice does not melt. It sublimates, which means that it changes from a solid to a gas.

Use caution when adding dry ice. You should never touch dry ice with your bare hands, it may cause severe frostbite. Wrap the dry ice in newspaper to protect your skin, the cooler, and the items that you store inside. You should also keep a pair of tongs near the cooler for handling the dry ice.

Taking two coolers allows you to avoid overpacking the food. While you want to pack a cooler tightly, using a single cooler may leave less room for ice packs, dry ice, or ice cubes. Using two separate coolers also allows you to separate the items that you are likely to need most frequently.

For example, you can place drinks and snacks in one cooler and meals in another. Cool air escapes each time that you open a cooler. You may only need to open the cooler containing meals once or twice per day, allowing it to stay cooler longer.

5. Prepare and Freeze Meals Before You Travel

A cooler packed with ice and frozen meals should stay cool longer. Heat passes from warmer objects to cooler objects. Warm food causes ice to melt faster due to the greater temperature difference.

You cannot freeze everything. Avoid freezing cream-based products, soft cheeses, and fruits and vegetables with high water content, such as cucumbers and lettuce.

You should also attempt to prepare as many meals and ingredients as possible before departing. Some items take up less space after prep work. For example, instead of packing onions, you can store chopped onions in a container.

Freezing your bottled water provides additional cooling power without taking up extra space. Place bottled water in the freezer the day before you go camping to have access to cold water throughout your trip.

You can freeze other liquids as well, including juice and milk. However, frozen milk is best suited for baking. The consistency and taste slightly change after freezing and thawing. Freeze juice and milk in airtight containers. You should also leave a little bit of space at the top of the container, as the liquid may slightly expand as it freezes.

7. Pack the Cooler Tight and Right

Excess space in the cooler allows air to circulate and the ice to melt faster. Pack tightly to maximize the cooling ability of the cooler. However, you should also pay attention to the order that you add items.

Start by placing ice in the bottom of the cooler. Use a layer of loose ice, dry ice, or several ice packs. Place frozen foods that you do not need to reach frequently on top of the ice. Add another layer of ice followed by unfrozen items and foods that you want to avoid squishing.

Fill in the sides and areas around the food with ice or ice packs. You should also avoid overpacking your cooler to limit the need to move things around to search for food. A typical recommendation is that the ice should take up about 30% to 50% of the cooler’s capacity.

8. Keep Your Cooler Out of the Sun

Exposure to the sun may cause the contents of the cooler to warm faster. Keep the cooler in a shaded spot, such as the inside of your tent. You could also cover it with a tarp or set it next to your vehicle. Setting it near the picnic table may also provide shade.

CAUTION: If you plan on using dry ice, do not place the cooler inside your tent or near areas with pets or children. Dry ice gives off carbon dioxide as it changes from solid to gas, which may be hazardous.

Keeping the cooler in the back of your car is not recommended. Even when parked in the shade, the inside of your car may reach over 100 degrees Fahrenheit with the doors and windows closed. Along with keeping your cooler out of the sun, you should keep it off the hot ground during the summer. Place it on a bench or a set of logs. The airflow prevents the transfer of energy from the cooler to the ground.

9. Add Salt to Your Cooler

Adding salt may protect your food by keeping the water from the melted ice cooler. Ice melts when temperatures reach about 32 degrees Fahrenheit. The water created by the ice never drops below 32 degrees, as it would then turn back into ice.

Adding salt to the ice lowers the melting point of the water, allowing it to reach lower temperatures. However, ice starts melting as soon as you add salt. Sprinkle salt over the contents of the cooler partway through the day after some of the ice has already melted. The salt will help lower the temperature of the water that is already sitting at the bottom of the cooler.

10. Don’t Open Your Cooler Too Much

As mentioned, cool air escapes each time that you open the cooler. Avoid opening the cooler unless necessary. This is another reason why bringing two coolers is a good idea. You can open the drink cooler frequently while keeping the main food cooler closed most of the day.

Ice eventually melts, adding a pool of liquid to the inside of your cooler. While you may be tempted to drain the cooler, the water may help keep your food cool longer.

The water can continue to cool the inside of the cooler for quite a while. Only drain the water when adding new ice or when the water no longer feels cool.

Stock up on non-perishable food. You may eliminate the need for a cooler or reduce the amount of food that you need to keep cool. If you do not bring perishable food, you do not need a cooler.

Peanuts, seeds, granola bars, and various canned foods are great options. You can heat beans, soup, and other canned items on the campfire.

How to Keep Food Cold While Camping Without a Cooler

A cooler is the most efficient way to keep food cold while camping, especially when packing a lot of food. If you have only a few items that you need to chill, consider using freezer bags filled with ice or ice packs.

Along with packing your cooler correctly, you should follow a few safety guidelines to protect against foodborne illnesses.

Here’s what you need to know :

You should also prepare as much food and meals as you can before leaving, which helps cut down on cooler space. Freeze anything that freezes and thaws easily, such as prepared meals, water, juice, and milk.

Remember to consider getting two coolers so you can separate food and drinks.

Julien Heron
I’m passionate about all things outdoors, bridging the gap between generations and sharing my passion for hiking and camping. My goal is to spread the endless benefits of being outside, always striving for better performance, new challenges, and ways to explore responsibly.
About Outdoors Generations
We are a family-run site with a team of outdoor experts who strives to inspire and motivate people of all ages to venture outside with confidence.
A little more about us.
Related Post
Camping With Kids Checklist (The Essentials Tips & Tricks)
How to Store Food While Camping: 15 Best Tips
Best Canvas Tent of 2021 (Guide & Reviews)

We want to make Hiking, Camping, and Backpacking more enjoyable for people of all ages, inspiring and motivating others to venture outside with confidence.
Explore
HIKE & CAMP
AMAZON ASSOCIATES PROGRAM
As an Amazon Associate, we earn from qualifying purchases.
© 2021 Outdoors Generations  |
Privacy Policy